The CSS Virginia was a much hurried response to the North's Anaconda plan where the Hampton Roads area was blockaded by the Union Navy.

At the outset the South had no ships to speak of. It was a ragged mix of captured Federal ships and old revenue cutters. Nothing to challenge the powerful and modern sloops-of-war the US Navy possessed at the time. 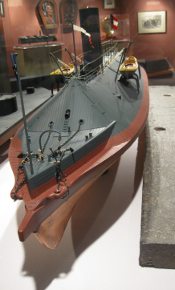 The South quickly realized they could not win the war without breaking the blockade.

The US Navy had no ironclads at the time. The French had finished the La Gloire a few years earlier and the British had responded with the brand new HMS Warrior.

In order to upset the blockade, there was no way the Confederates could enter an arms race with the Union Navy, but a few ironclads could change the game rapidly.

Plans were made to purchase ironclads from Europe short term while organizing the construction of domestic ironclads long term.

From Ashes to Ironclad

As the Union troops evacuated the Gosport Naval Yard in Virginia, they destroyed a lot of arms and material to prevent it from ending up in enemy hands. The USS Merrimack was among the vessels that were set ablaze in the effort.

The hull and power plant of the Merrimack was soon raised by the Confederates as they were cleaning up the ship yard.

Lieutenant John Brooke (of Brooke rifle fame) had developed a plan for a seagoing ironclad battery that had been approved by the Confederate Secretary of the Navy, Stephen R. Mallory.

As time came to find a suitable steam engine in the chaotic mess the Union had left at Gosport, everybody's eyes fell on the raised hulk once the USS Merrimack.

A decision was made, rather than building the new ship from scratch, the USS Merrimack was to be given a new lease on life.

John L. Porter was the naval constructor put in charge of the project. He had the remains of the once proud frigate surveyed and made up plans for her reconstruction.

The hull of the USS Merrimack was cut down to a level a couple of feet below the waterline. In the middle section a casemate was built with sloping sides. The sections at stem and stern that were now open and below the waterline were covered.

The cannons were placed four per broadside and one in each end. The end cannons could be moved to gun ports on either quarter for better coverage.

The casemate was too narrow to permit locating cannons straight across from each other so Porter found a solution in staggering the cannons.

Specifications of the CSS Virginia Ironclad:

The name was officially changed to Virginia, but some people on both the Union and Confederate sides kept referring to the ship by her old name.

Some of Porter's plans have survived to this day. Porter's plans have many annotations, notes and corrections, some hastily made in ink – others in lead pencil. Many of his own notes and plans are conflicting. A sign that getting her ready had higher priority than keeping the documentation tidy for posterity – pretty easy to understand.

As I've said before, there are no surviving photographs of the Virginia. There is however a number of plans of her that have survived and vivid descriptions. It's interesting how the same information can be interpreted so differently. A good example is illustrated from these two CSS Virginia models. 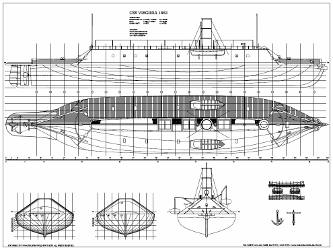 I've spent a lot of time researching the vessel and drew up a set of plans. Follow the link above to download the pdf file.

Listed below are some of the kits I'm aware of. Quality will vary.

Return from CSS Virginia to Ironclads