Torpedo Boats - From spar torpedo launches to destroyers and MTBs. Learn the history and development and where to find plans and kits for static and working models for – RC – steam - electric.

Torpedo boats were a new idea for an old concept - to attack, usually a larger opponent, using stealth or speed or both. Below are some categories that this fascinating subject falls under. Click the headings for more information.

The first form of torpedoes were little more than an oversize broom handle with a metal can full of black powder explosives at the business end, equipped with a trigger mechanism.

This type of weapon saw an increase in use during the American Civil War. The conditions were perfect since a lot of fighting took place on the rivers where the water was relatively calm. Add to that the high value targets posed as ironclads.

The Self Propelled Torpedo

After the British engineer Robert Whitehead invented the first self propelled torpedo in 1868, torpedo boats were on all navies agendas, large and small. Large navies were involved in an arms race where ironclads were being built with thicker armor and growing gun calibers. 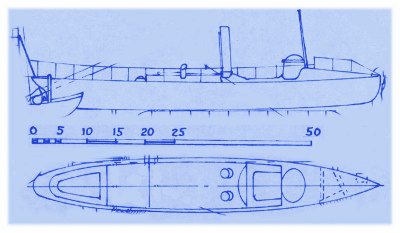 Ever-increasing armor thickness and gun weight made the battleships heavier and more difficult to maneuver. The new big guns were powerful but slow to reload. The combination set the stage for small and fast crafts with a deadly load.

With the self propelled torpedo, all of a sudden the smallest nations could upset the virtual stalemate and challenge the most powerful navies.

All said and done, the world’s navies started building fast and nimble launches to carry the new torpedoes. One thing to remember is that the flammability of gasoline was seen as too dangerous to be used for boat propulsion in warships, and the diesel engine and steam turbine were both barely a reality.

So the displacement hulled boats were all powered with compound steam engines. To make them fast, they had to be long and narrow with a high engine power to weight ratio.

In and Out of Favor

The French, Italian, Russian and American navies were quick to create torpedo boat flotillas. These boats were usually between 25 and 50m long and a displacement in the 30 to 150 ton range. Maximum speed varied between 20 to 30 knots, usually from a single propeller, but later, as the boat type grew longer, typically equipped with dual props.

The Royal Navy in Britain was often one of the first to develop and test new technologies, but slow to implement. Instead they had for a while adopted a policy of wait-and-see.

Once the potential opponents had shown their cards they tended to take action – usually responding with as much power and gusto that the opponents ships became obsolete.

The torpedo boat met a similar fate. As the cost of capital ships were extremely high compared to the cost of the new threat, different counter measures were needed.

Well before WW1 the boat type was all but obsolete. Destroyers with steam turbines could now easily outpace them with better sea keeping abilities and a more versatile design overall. The destroyer overtook the narrow duties of the opponent it was designed to engage and exterminate. Exterminate they did.

With the combination of high powered gasoline engines and planning hulls a revival of the idea of inexpensive, fast and deadly would once again come to life. This time in the shape of motor torpedo boats, right around the outbreak of WW1.

These boats are interesting subjects for sure, from an era where technology was almost as rampant as it is today. Their relatively small size makes them suitable for beginners without being boring. They sport a lot less railings, ship’s boats and gun barrels to worry about than on cruisers and battleships of the same era.

If you are into RC scale models, for many TBs you only have one motor, shaft and prop to worry about, which is good. On the other hand, the hull access hatch may be difficult to conceal. Some planning upfront may be in order. Propulsion can be by electric motor or a light weight steam plant.

Considering the short life span of the boat type, there are quite a few plans available - mostly Russian or German. A few I've found are as follows:

This book is the best source for anyone interested in the early British Torpedo Boat Destroyers. It contains a plan on a separate sheet of the HMS Velox (1904), a Viper Class TBD. The plan is drawn by John Roberts to 1/96 scale and is of superb quality. The plan is printed on two sides with GA plan and profile on one side and complete hull lines and GA sections on the back, so plenty of information to complete a model.

The rest of the book is also quite useful for builders of other subjects of the ship type, even of other nations. Many nations ordered TBSs from British shipyards as prototypes for their domestically built clones. This book may not address those ships specifically, but may shed some light on the basic layout of equipment and such. The paperback version of this book is readily available and quite inexpensive.

S.M. Torpedoboot "Tapfer" - from the appearance, I'm guessing it is from the 1880's. This is an attractive looking boat. Drawn on a single sheet at 1:50 scale. At the scale drawn it may be difficult to build as an RC model. I'd enlarge it to 1:32, or possibly 1:24 scale. This plan is drawn by Dirk Nottelmann, Wedel.

S.M. Torpedoboot "S-33" - One of the most successful German TB designs was the S-1 through S-66 class as built by Schichau Werft in Elbing in the mid 1880's. Several were ordered by foreign nations with minor design changes, such as: Austria-Hungary, Italy, Russia, Sweden, Norway, Japan and China. This plan is drawn by Dirk Nottelmann, Wedel.

Kleine Torpedoboote A1-25 - The plan is drawn to 1:50 scale and would be on the small side for an RC model. These boats were built in 1914-1915 by AG Vulcan in Hamburg. At this time most nations had abandoned the idea of torpedo boats as an effective weapon due to the widespread acceptance of the (Torpedo Boat) Destroyer as a more effective ship type.

HMS Hornet 1893 – A Havock-class torpedo boat of 240 tons displacement (length: 55m and beam: 5.6m). Drawn by Charles Sells to 1:48 scale. By the description, the proportions are wrong or there is a typo in there somewhere.

US Torpedoboot 3.Klasse – This is a small TB that was carried as a tender or launch aboard US cruisers and battleships of the late 19th century. In this particular case on-board the USS Maine that blew up in Havana harbor, Cuba, in 1898.

Return from Torpedo Boats to Homepage

US Department of the Navy - Naval Historical Center