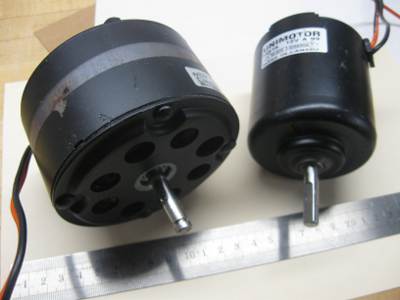 It's been a while since I have been in touch, but I have run into a bit of a problem with my model. I purchased a fan motor from the local wrecker. I think I may have gotten the wrong motor - it is an air fan out of a Holden Commodore 12V 300watt 13 pole.

I was in touch with Action electronics in UK, Purchased a P80S CONDOR 20/2' AUTOSET Computer SPEED CONTROLLER. It works on smaller motors OK, but only growled loudly and turned the motor very, very slowly forward & reverse.

I have emailed EA Electronics in USA about a motor and SCO 10 and 20 ESC but have no reply. I would have liked to of been able to purchased motor ESC listed below. I think they may not sell internationally? I have emailed twice without a reply.

E. A. ELECTRONICS: MOTORS. (Stature electric motor)
"A giant 5 pole motor, capable of putting out 1/8 horsepower in continuous operation. Made in the USA by Stature Electric Inc.. Has ball bearings and is very quiet." More motor spec on their site.

That's an awful lot of poles on that motor! Unfortunately, I don't really have a clue why it's not working. Is the motor OK? Have you tested it with straight DC power from a battery? It's probably a long-shot, but just to make sure.

The next thought I had was, that at 300W and 12V, the motor is nominally rated at 25A. That's more than the rated Amperage the ESC can handle. Stall current could easily be 100A or maybe even higher.

For small to medium ESCs I'd like to see the ESC max current rating to be closer to the motor's stall current than the nominal for safe operation. This approach may be price prohibitive when moving into the realm of big motors like these, so a 20A fuse would be a good idea just to make sure you don't fry the ESC.

After initially reading your post, I went down in my basement to dig up a couple of automotive fan motors I bought a few years ago when the US auto industry fell on its nose. I'm glad I did, they are nice motors. See the picture above. They are quiet and extremely powerful. I think if your motor is anything like these, your in the right ballpark motor wise.

The motor to the left has a ridiculous amount of poles when I look through the vent holes in the front. The smaller is sealed up, so I have no clue what goes on in there. They seem to run somewhere between 2,000 and 3,000 RPM at 12VDC and have gobs of torque. These are perfect model boat motors, if you can fit them in the hull.

Both appear to have ball bearings and 8mm or 5/16" shafts.

Here is what I would try if I were you, before sinking more money into combinations that may or may not work.

First, make sure your fan motor works and that you're happy with it.

Second, make a simple forward-off-reverse speed control to go with the motor you have. There is a group of enthusiasts that build large RC tanks that need big motors. You could build the "MAG" speed control with a servo and a couple of snap-action switches (also known around the world as "Micro Switches"). Here is a link to their RC Tank Combat Site.

Third, if that works well enough - problem solved. Otherwise, experiment with getting better performance components on the bench. Once you have an alternate setup, implement it in the boat.

Now I got inspired to build a big boat for one of my motors!

I hope that helps.