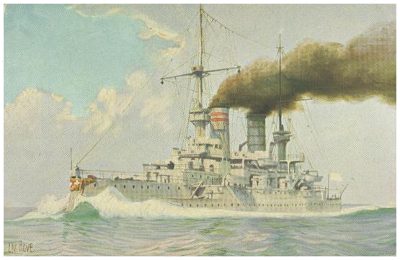 The word Pre Dreadnought is impossible to grasp without knowing more about the British Battleship HMS Dreadnought and her design. Her launch in 1906 sent political tremors through-out the world and firmed up Britain's dominance on the world seas.

Battleships in the Russo-Japanese War

By the outbreak of war between Japan and Russia in February 1904 and the subsequent naval encounters that ensued were to change naval strategy once again.

Anybody that still held the belief that a ram bow would be useful on battleships was shouted down once and for all after the battle of Tsushima.

The Admirals of the world were baffled to hear hits were recorded at a distance of 7,000m at the battle of Tsushima. The "in-your-face" sea battles, at relatively short range, that were fought during the American Civil War were never to be seen again.

HMS Dreadnought has been known as the first "all-big-gun" battleship. As battleships had evolved, battleships typically carried a maximum of four main guns in two turrets, one on center-line ahead of the superstructure, and one behind.

What was new with HMS Dreadnought was that she carried a total of ten 12-inch guns - the equivalent of 2 1/2 pre dreadnoughts, but at a fraction of the cost.

She was also the first battleship equipped with steam turbines which reduced her machine weight and increased her speed compared to contemporary battleships.

Needless to say, by her launch all other navies were reduced to zero in terms of fighting power.

I don't know the official definition, but here is what I consider a Pre Dreadnought:

Previously ironclads and monitors had been built with iron or compound armor - which meant that in order to sustain a hit from a big gun you needed more of it, which increased the displacement and usually hampered speed, or range, or both.

Also, up until the 1870's capital ships had carried rigging - masts and sail. By now that was all done with.

Old US battleship plans can be downloaded from my model boat plans store. I currently offer the General Arrangement plans of the following US pre dreadnoughts:

French plans were available for download from Service Historique de la Defence until just recently. I'm unable to conclude if the service was withdrawn or simply had it's URL changed. Not being able to read French doesn't help either in this instance. For anyone who knows more, please notify me through the contact page here, and I'll post it on this site.

Some German plans are available from The Dreadnought Project

I've been looking for pre dreadnought kits for a long time, and I've found there are not a whole lot out there. Here are the few that I've found. It also seems that the market for this era of ships is perceived as soft by the manufacturers. As a result, the kits suffer from short runs and go out of production often. My policy is, if I find a kit at a fair price, I snag it.

Return from Pre Dreadnought to US Battleships