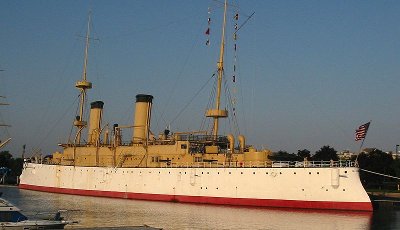 The USS Olympia is most famous as Admiral Dewey's flagship at the Battle of Manila Bay during the Spanish American war in 1898. She served on and off until put into reserve in 1922. The ship is also the oldest floating steel warship in the world and the last surviving ship of the Spanish-American war.

She had undergone several modifications during her career. However, in 1957 she was transferred to the Cruiser Olympia Association who restored her to her 1898 appearance.

She is now preserved and part of the exhibit at the Independence Seaport Museum in Philadelphia. A must visit, if you are in the area.

I offer plans in two scales, 1/96 or 1/144 - your choice. The sets are downloaded on pdf format for you to download and have printed locally.

To learn more about what the plan sets include, click here. 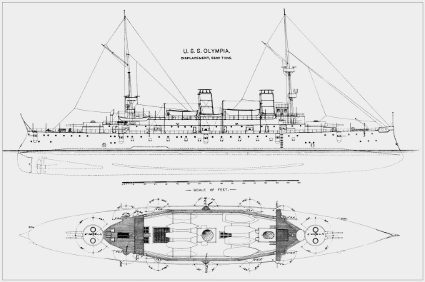 I'm not talking about the old Revell or Pyro model here. Those kits are so over priced and awful I won't waste another word on them. If you insist on a kit, track down the 1/128 scale, limited edition kit by Bluejacket. I'm sure there are a handful unbuilt kits in closets still. But you may have to wait a long time for one to surface. So what to do?

Build from scratch, that's what Roger Kreiter from Chester Springs, PA did. See pictures below. 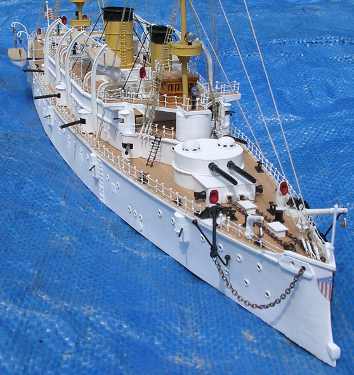 In the spring of 2012 Roger purchased the 1/144 plans of the USS Olympia from this site and finished the model from April through August. Roger modified the hull cross section templates to finish the ship as a waterline model.

Here is a shot showing the basic plank-on-bulkhead hull construction. Note that the hull is upside-down. The templates from the plan was doctored at the water line and glued to 1/8" basswood and cut out.

Two strips of basswood were sandwiched (one on top of the other) to become a keel running the length of the hull, except for the extremes.

On top a false deck adds even more support and will be covered with strip planks. Also notice the notches at the bottom corners and one along the height of the bulkheads for hull stringers. 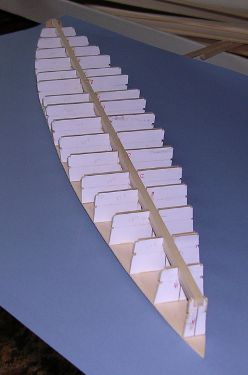 Here the deck planking is almost finished. Notice the stringers are in place. 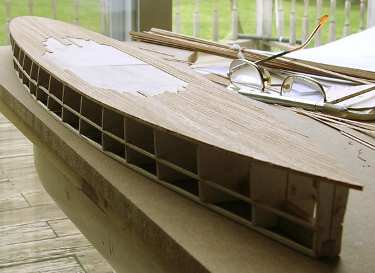 Sections of 1/16" thick balsa sheet is beginning to cover the hull. Looks a little rough right now, but a swan is about to emerge.

These two pictures illustrate how blocks of balsa has been attached and shaped to form the ends of the hull. This is a wise choice to accomplish a sharp edge at the extremes.

Here the superstructure is on its way. It may look intimidating on the plans, but in this picture Roger has helped us see that it's a little more than a polygon-shaped box. You can also see where the skylights and masts will go. Nice job on the deck planking as well. 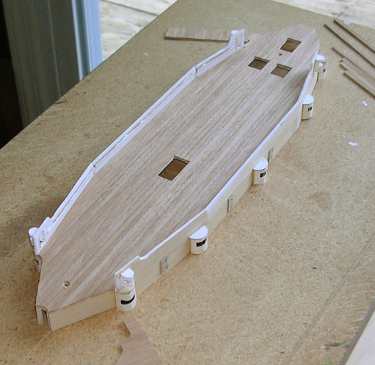 You can easily break the bank if you buy commercial ship fittings. It takes some practice to learn what you can make and what you're better off buying.

In the picture you can also see Roger's original artwork for the US shield. He painted half the shield and scanned it into his computer. He then used Powerpoint to mirror it and add the stars. Finally scaled it down and printed out several sizes to "try for size". A very clever and resourceful approach. 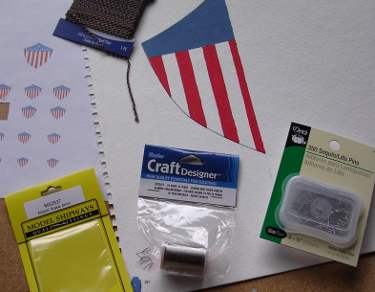 Ship's boats carved from solid wood and keels added made from card stock. 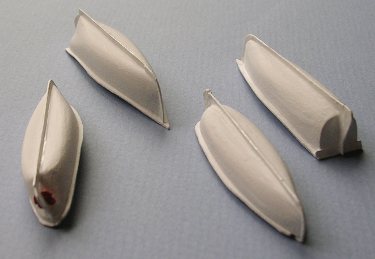 This is a detail shot of the hull side showing port holes, a sponson and hatches. In the lower right you can also see a torpedo tube hatch. The sponsons were made from wooden dowel split in half that were carved and sanded to shape. 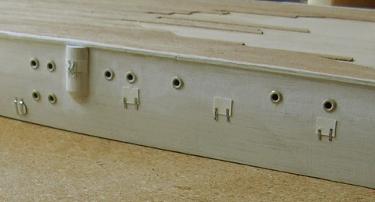 Here you can see where the 13mm sequin pins and beading wire ended up. Also note the walkways, gun positions, skylights and air intake. 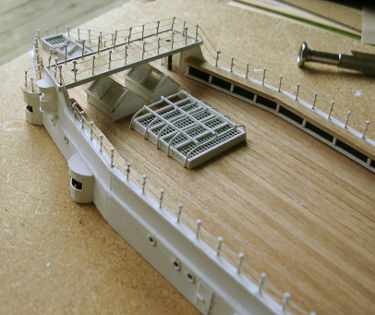 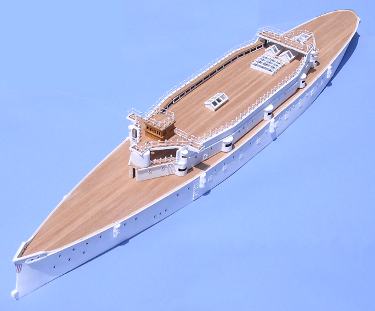 Olympia's funnels are different shape: the forward is oval and narrow, whereas the aft-most is round. Roger used an old aluminum cigar container for the round funnel, but had to build the oval from scratch - a split dowel spaced apart with a strip of wood.

A picture says more than a thousand words. Here are the 8-inch gun turrets. 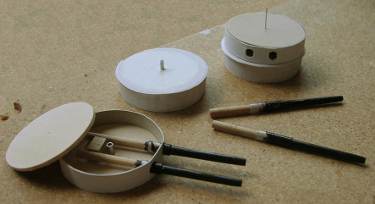 Here the anchor chains are being fitted. Getting the right size is important to make it look right. 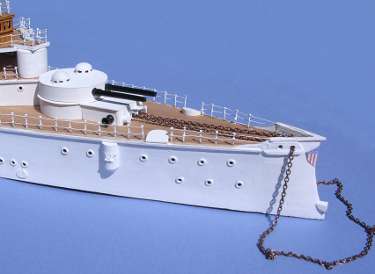 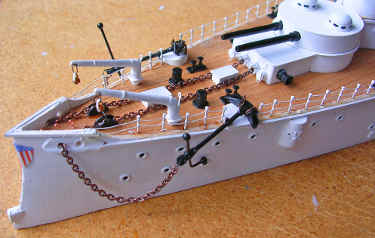 Roger mentioned the rigging was giving him a headache. It seems the rigging of the USS Olympia was changed so many times over the years it is difficult to find reliable sources and good references. 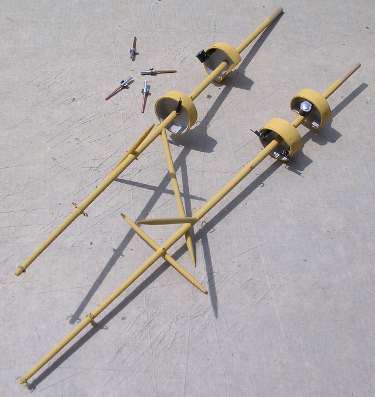 Roger finished the model in about three months, which is pretty impressive in my book. He also demonstrated that you can make a most handsome model with relatively simple tools and with very simple materials. I take my hat off for a splendid effort! 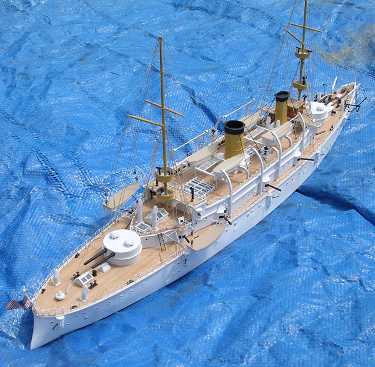 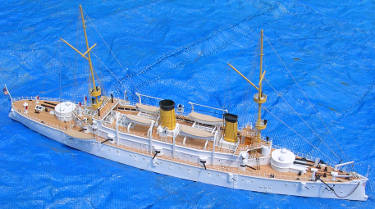 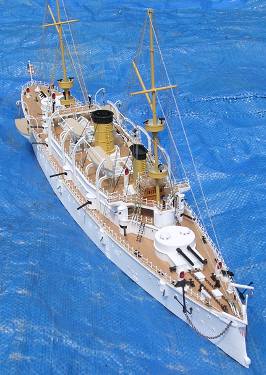 An old steel warship is expensive to maintain and the lack of funds over the years have left her in a pretty rough shape today. In 2010 there were rumors on the web about scrapping her or making her into an artificial reef due to lack of funds.

Fortunately, clearer minds prevailed and it looks as if the old cruiser dodged the smelters once more. However, funds are needed to save her. You can do your part by donating funds to the National Trust for Historic Preservation.

I want to extend a big Thank You! to Roger Kreiter for sharing how he scratch built this beautiful model of the USS Olympia and letting me use his pictures. I owe you one, buddy!